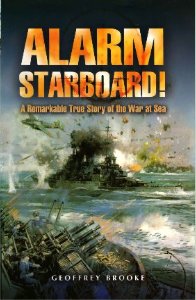 A Remarkable True Story of the War at Sea

Few sailors can have experienced the variety of drama, adventure and danger that befell Geoffrey Brooke during the Second World War. As a young officer in the battleship 'Prince of Wales' he fought against the'Bismark' , met Churchill and Roosevelt and took part in the Malta convoy run. On Wednesday 10 December 1941 he was witness to the devastating sinking of the 'Prince of Wales' and 'Repulse' by Japanese air attack. Rescued by a destroyer he returned to Singapore only to have to escape shortly after from the victorious Japanese.

Thus began an epic sea journey, involving a second sinking and a 37 day passage across the Indian Ocean from sumatra to ceylon in a small native boat. Once back in the UK, he joined the cruiser 'Bermuda' for the Allied landings in North Africa (Operation TORCH) before taking part in the treacherous Arctic convoys to Russia.

After illness and convalescence he volunteered to return to the Pacific theatre of war and served in the aircraft carriers 'Indomitable' and 'Formidable' surviving, as Flight Deck Fire and Crash Officer, two kamikaze attacks on the latter.

'Alarm Starboard !' is a naval memoir of exceptional interest and breadth.

(Please write your name and address on the reverse of cheque)