In Memory of Eileen Robertson 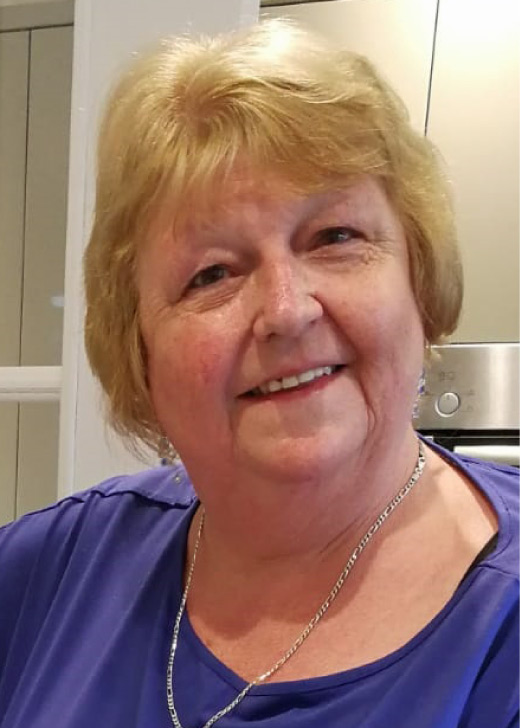 You never think it will happen to you but it has. Eileen had been fighting cancer for three years. She kept positive in all that time and never complained, even with all the treatments she had to endure.
Sadly, Eileen passed away 29th March 2020 and with no visiting because of COVID19 we feared the worst but the hospital did allow myself, son Matthew, daughter Stacy (no “e”) to stay with Eileen for the last 24 hours and to be with her as she drifted away into a peace with no pain, it was such a moving moment and one we shall always cherish. My two children have been unbelievably wonderful, as I am not sure how I would have coped without them. Eileen was quite a shy person especially where there were groups but to her family she shone. She doted on our three grandchildren, you could just see the love in here yes, she was firm and fair. Christmas was a special time like with everything she done it was warm and thoughtful and love to sit back and watch the happiness. It was a great reward for her. She always said she is not a child of a FEPOW but my Mum and Dad thought the world of her and would have been so proud of the work she put into COFEPOW over the years, it was immeasurable.
We took over as membership officers from Robin and Beryl Canwell in 2011, back then everybody paid their membership on the month they joined which was quite difficult to keep up with the membership growing. It was Eileen who devised the sliding scale system we see today, it took 11 months to become fully operational but she did it. Her memory was unbelievable she would remember oddities and anomalies that would have passed me by, dates, times, people and any related trivia.
I became a trustee in 2006 and Eileen in 2012.She was very thorough and worked hard on the team. She pushed hard and was determined to get the newsletter in colour which eventually happened, that was her.
In 2015 when the committee decided to go ahead with the anniversary medallions, it was Eileen who masterminded the ordering, stationery and postage to every member. Keeping records of all and re-orders and she was so humbled with the letters and emails of gratitude. I know a lot of members knew her personally and I thank you for your cards and thoughts. We had so many memories of meetings, AGM’s, trips, Remembrance days, weekenders with so many COFEPOW friends always with laughter and some tears. COFEPOW has been a big part of our life for 20 years and have seen it grow into what it is today, through the hard work of many people who volunteer to keep the memory of the FEPOW’S alive, we both admired that dedication.
Eileen was funny, intelligent, sometimes stubborn but a great wife, mother and grandmother but liked to be called “nanny”.  We met in 1966 while out riding our bikes at the top of her road where she lived,friendship grew and turned into love somewhere along the way and married in 1970.
We had our disagreements from time to time as most couples do but always went back to the closeness and comfort of each other. We would have been married 50 years in November that was taken away from us, also our daughter was getting married in 2023 and she was already planning the event and a trip to a London show with her mum and friends. How things change so quick.
I have never hurt so much in my life, how I wish I could have that one last hug and kiss again.
So, to someone close to you, just squeeze their hand give them a hug, a pinch or a kiss, it really is something you need to remember, always.
Because of COVID19 we were only allowed 10 people at the funeral so my son and daughter set up a Cancer Research giving page, if you would like to visit it please go to.

I cannot remember when Graham Robertson became a member of COFEPOW and after a while his wife Eileen also joined us.
I have to say they were no ordinary members,  Graham Robertson threw himself into anything if it helped COFEPOW in any way and in particular when we held FEPOW exhibitions for the public.
It wasn’t long before Graham’s wife Eileen joined us as well - her first words  being typical of  her nature  “What can I do to help?” and help she did on so many occasions over the years to come.   For example several years ago a small group of members (including myself and my late husband) -  saved up to cover the cost of a  visit  to the Solomon Islands (off Papua New Guinea) where their FEPOW relatives had been imprisoned by the Japanese,  many of them  having died and are buried there.    We were welcomed by the English speaking  local people including a few elderly members of the tribe  who could remember many British soldiers being held there during World War 11.   One of these  islanders, a local lady called Philomena   was a “teacher” to the young children  without  the use  of any educational books for children or pens or paper.  One of the few books that Philomena had was one by Shakespeare !!   They used  sticks  to write numbers in the sand. Those five days have to be the most memorable time of my life that I will never forget.
On our return to the UK those of who had made this journey decided to collect what educational books  we could (early learning reading books, paper, pens etc } and send them to Philomena back in the Solomons.  Eileen Robertson  did not go on that wonderful visit to the islands ,  but showed her support by offering us  4 very large  boxes of young children’s  reading books - unknown to us Eileen worked for a publisher of children books and these books were unsold stock.   But the next problem was how did we get them to the children in the Solomons and what would it cost.  So I wrote to the local Head Post Master asking his advice.    We were absolutely delighted to receive his reply that arrangements had been made to collect these boxes of books  (we added packets of A4 plain paper, pens, pencils, coloured pencils and crayons etc) and they would be sent free of charge in support of our charitable actions.  It was to be some months before I received a letter from Philomena   (which I still have) telling us that the  the books  etc had arrived safely.
But I also will never forgot that it was mainly due to Eileen Robertson that children on a far away island can now read and write.
Rest in Peace Eileen, you had a heart of gold   but it wasn’t enough to keep you with us.

It is with deep regret that I have to report on the death of Eileen Robertson who has been a member for many years. Eileen was married to Graham Robertson who was one of the original trustees in the days long before we had the memorial building at the arboretum and was always there to help him and the trustees before during and after the building was opened. Later on she and Graham took on jointly the job of membership officers at a time that COFEPOW was growing at a fast pace and completely reorganised the system of membership and payment of subs which we still have in place today. Eileen has always been one of the first to volunteer to help and organise any event run by the local Norfolk branch and even during these last few months of her life along with Graham has organised a coach and accommodation for the group to attend the VJ celebrations at the Arboretum in August.. Eileen will be very sadly missed not only by her family but by the many friends she has made over her years. May she rest in peace.

Search for a COFEPOW event in your part of the country.