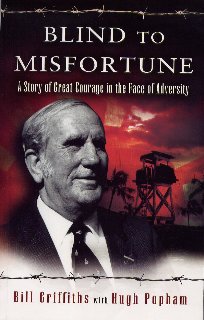 Bill Griffiths lost both hands and both eyes when he was a prisoner of the Japanese in Java in 1942. This book tells the story of how he overcame these two shattering handicaps, either one of which might have qualified him to spend the rest of his life quietly in a home for the disabled. But Bill had no intention of allowing himself to become an object of pity and it was not long after his return to civilian life that he began to make it clear that, even if he had no hands and no eyes, he still had his own two feet and he certainly intended to stand on them. Inevitably life has not been without its ups and downs and certainly Bill could not have got where he has without the care and devotion of his wife Alice. Their story is one of remarkable courage, told with no trace of bitterness and with a generous helping of laughter. It is a measure of the man that Bill can end his story with the words, 'I've been lucky'!

Hugh Popham, poet, novelist, military historian and documentary writer, published his first book, a collection of poems, in 1944 when he was still a fighter pilot in the Fleet Air Arm. Since then, he has written four novels, an account of his wartime flying, two regimental histories, a substantial history of British naval aviation - Into Wind and various other books which include A Thirst for the Sea, An Account of the Sailing Career of Erskine Childers based on Childers' original log books and F.A.N.Y. - The Story of the Women's Transport Service.