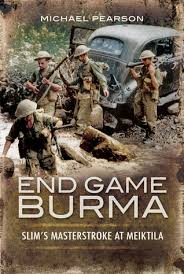 When the Burma campaign is discussed,the turning point battles of Imphal and Kohima are most often thought of.However General Bill Slim’s bold but risky plan to outflank the Japanese on the Irrawaddy at Mandalay deserves far more credit.With the Japanese withdrawing,Slim’s 14 Army (with two Corps – XXXIII and IV) risked a punishing crossing of the mighty Irrawaddy at Mandalay opposed by the main Japanese army.To avoid this is was decided to split 14 Army and send IV Corps on an arduous 300 mile march to seize the town of Meiktila,85 miles south, a vital rail and road hub and the main Japanese administrative base. Complete secrecy was essential as if the Japanese realised they faced only one Corps rather than two,they might have counter attacked successfully.In this detailed analysis of this crucial manoeuvre the author describes the plan,the risks,the actions,the seemingly insuperable logistic problems, and the efforts to retain US air support(for which Mountbatten was largely responsible).

Michael Pearson was born in London shortly after the war and has had a lifelong interest in maritime history and shipping. He worked in the shipping industry in the city of London for over twenty years. He now researches history having achieved a degree in History full time. He is also the author of The Burma Air Campaign and Red Sky in the Morning (both with Pen and Sword). He lives at Westcliffe-on-Sea, Essex.