I Will Sing to the End 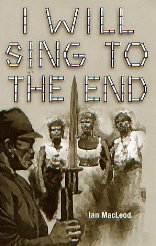 Ian MacLeod's mother Dorothy, a talented singer and teacher, died in Japanese captivity in Sumatra, like so many internees a few months before the war ended. His father, Donald, a Singapore exchange broker and accomplished piper, commanded 2SSVF [2nd Battalion Straits Settlements Volunteer Corps] and was a POW in Singapore and Thailand. He died shortly after the war.

This book tells the story of Ian's 50 year search to find out about his mother's captivity and death.

The strength of this book is as a piece of family history including photos which give us glimpses of growing up in 1920s/1930s Singapore. There is also much of interest relating to the Volunteers - Donald's business partner was E.A. Brown who served in the Singapore Volunteer Rifles in the First World War and Donald himself was responsible in 1924 for raising the 1SSVF Scottish Company.

For further details including how to order click here