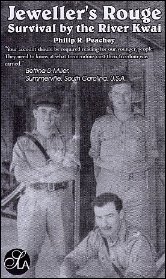 Philip Peachey was called up in the summer of 1940 as the Battle of Britain was in full swing. He joined the King's Own Yorkshire Light Infantry and as a young officer he left Britain for the Far East via Canada, South Africa and India.

With the fall of Singapore to the Japaneses Lieutenant Peachey became part of the 'raw material' eventually used to build the Thai-Burma Railway. Prisoners were taken north into the jungle camps of Thailand where many were eventually to die.

'Jeweller's Rouge' is a personal account of three and a half years of deprivation and trial borne with grit, fortitude and humour.