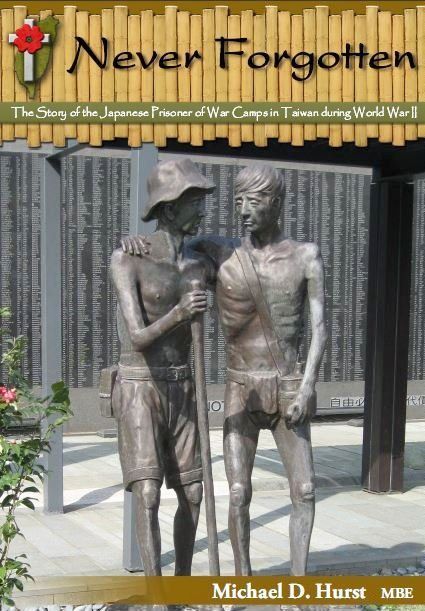 ‘NEVER FORGOTTEN’ tells the story of the Japanese prisoner of war camps on the island of Taiwan (Formosa) in the Second World War. It is the only book ever written that provides the complete story of all the Taiwan camps and the men who were interned in them.

Finished on Remembrance Day - November 11th 2020 - 75 years after the end of the world’s most devastating war, this book traces the story of the allied soldiers, sailors and airmen - primarily British, American, Australian and Dutch  - who were taken captive by the Japanese in Hong Kong, Malaya, Singapore, the Dutch East Indies and the Philippines and sent to Taiwan to do forced labour for their war effort.

What you will read is the result of numerous interviews with the former Taiwan prisoners of war, the collection of materials supplied by them and their families, and thousands of hours spent poring over their diaries and letters, as well as other material from war records, regimental diaries and archives. It is their story, told in their words from what they have shared with the author, and which was discovered during 24 years of research. In addition, the author has visited all of the Asian countries involved with this story, seeking and collecting information on the camps in those areas and what took place there relevant to the Taiwan POWs.

At 620 pages, it covers that little-known story in detail – beginning with the battles that led up to their capture; their transportation to Taiwan in filthy, overcrowded ‘hellships’ and their struggles to exist in the fourteen Japanese-run prison camps on the island from 1942 - 1945. There is a chapter devoted to every camp and the story also follows those who moved on to camps in Japan and Manchuria. The relief and evacuation of the POWs by allied forces following the Japanese surrender is also documented, along with their care and treatment in Manila, their subsequent transport home and finally, their lives after the war. There are also appendices that provide information on the capture, indictment and trials of the Japanese and Taiwanese war criminals following the war.

Over 675 photos - many in colour, on the book’s high-quality glossy paper - visually enhance this epic saga. With more than 170 drawings and artifacts - also mostly in colour, the book is lavishly illustrated with historical material which accompanies the text. There are photos of the POWs and the camps, all of the hellships that took them to and from Taiwan, the allied aircraft that brought them relief when the war ended and the ships that rescued them and took them to freedom and home. There are also many photos that show how the former camps and related places appear today.

Drawings made by the POWs are often the only records existing of the life and conditions in the camps and many augment the pages of this book, making it come alive for the reader. Much of this material was provided by the POWs and their families and has never before been published.

We wanted to produce the finest quality book possible using a high-gloss paper that would enhance the photos, drawings and ephemera like most ordinary books are unable to do. Hence with the higher density paper the book weighs a bit more, resulting in the higher cost for shipping, but we are certain that you will appreciate the high quality of this special once-in-a-lifetime book.

The cover features the sculpture of the two emaciated POW figures standing before the memorial wall in the Taiwan Prisoner of War Memorial Park at Jinguashi, Taiwan. It seeks to evoke an understanding of the suffering that the prisoners endured and how mateship meant so much to the men - all of whose more than 4,350 names are engraved on the wall.

Twenty-four years of meticulous, exhaustive research and more than three years of writing have produced this different kind of war story. It is heart-warming and humorous in places, giving insights into the men and how they stood by their mates and helped them survive. It also tells about the Taiwanese people who had sympathy for the POWs and how they tried to help them.

It is quite likely that due to the lateness in writing, this could very well be one of – if not the last books on the Taiwan POWs ever compiled with the direct contribution of those men who lived the events described herein.

This book is not only a valuable historical reference work but, more importantly, it is also the saga of men who triumphed over great adversity and who surely deserve a place in the annals of World War II history and should not be forgotten.