No Mercy From The Japanese 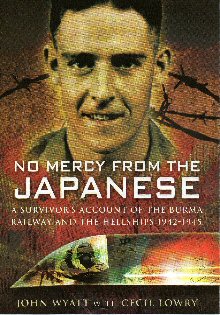 By the laws of statistics John Wyatt should not be here today to tell his story. He firmly believes that someone somewhere was looking after him during those four years. When readers of this gripping memoir examine the odds they will understand why he holds this view.

During the Malayan campaign his regiment lost two-thirds of its men. More than three hundred patients and staff in the Alexandra Military Hospital, Singapore, were slaughtered by the Japanese - he must be one of the very few survivors still alive today. Twenty-six per cent of British soldiers slaving on the Burma Railway died. More than fifty men out of around six hundred died on the 'Asaka Maru', which was torpedoed, and the 'Hakasan Maru', the grim second 'Hell Ship' that took on survivors. Many more POWs did not manage to survive the winter of 1944/45, the coldest in Japan since records began. Yet John survived all these traumatic events and this chronicle of his experiences makes for the most compelling and graphic reading. The courage, dignity, endurance and resilience of men like him never ceases to amaze.

Describing as it does with quiet understatement the courage and endurance of his colleagues and the cruelty of their captors, No Mercy from the Japanese is a humbling and unforgettable story.

£2.00 from every order will be donated to "COFEPOW"

Order on line at www.pen-and-sword.co.uk