Not the Slightest Chance 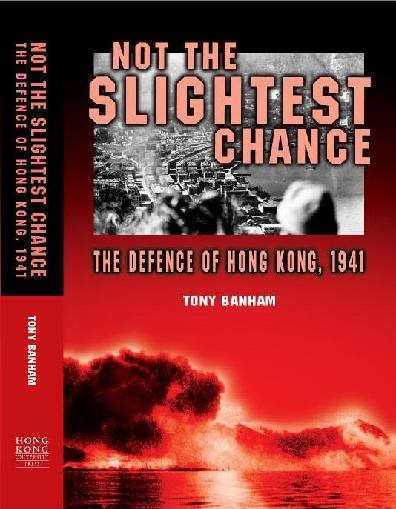 The Defence of Hong Kong 1941 by Tony Banham

"Not the slightest chance" was Winston Churchill's April 1941 estimate of Hong Kong's prospects in the face of a Japanese assault. When in December the attack came, his prediction proved sadly accurate in just 18 days of brutal and confused fighting. In this book, Tony Banham tells the story of the battle hour-by-hour, remarkably at the level of the individual participants. As he names individuals and describes their fates, so he presents a uniquely human view of the fighting and gives a compelling sense of the chaos and cost of battle.

More than 10% of Hong Kong's defenders were killed in battle; a further 20% died in captivity. Those who survived seldom spoke of their experiences. Many died young. The little 'primary' material surviving - written in POW camps or years after the events - is contradictory and muddled. Yet with just 14,000 defending the Colony, it was possible to write from the individual's point of view rather than that of the Big Battalions so favoured by God (according to Napoleon) and most historians.

The book assembles a phase-by-phase, day-by-day, hour-by-hour, and death-by-death account of the battle. It considers the individual actions that made up the fighting, as well as the strategies and plans and the many controversies that arose.

'Not the Slightest Chance' will be of interest to military historians, Hong Kong residents and visitors, and those in the UK, Canada, and elsewhere whose family members fought, or were interned, in Hong Kong during the war years.

Tony Banham is a long-term resident of Hong Kong, having arrived in the 1980s. He has been studying the Battle of Hong Kong for well over a decade and has written on the subject, aided in the production of television documentaries, and helped many children of veterans in their researches into their fathers' war years.

"This meticulously researched book opens up rich new detail on many aspects of the battle of Hong Kong. It provides a balanced view of complex and controversial events, not least the important participation of the Canadian Army's 'C' Force. Indispensable for anyone with an interest in the Hong Kong battle." - Roger Sarty, author of The Maritime Defence of Canada and The Battle of the Atlantic

"No future work on the battle will be able to ignore this book. Tony Banham has done for the battle of Hong Kong what students of other WWII battles will wish had been done for their subjects. They may indeed now try to emulate this valuable work." - Brian Farrell, Associate Professor of Military History, National University of Singapore

(possibly not available until end of April 2003)

Rest of the World :-