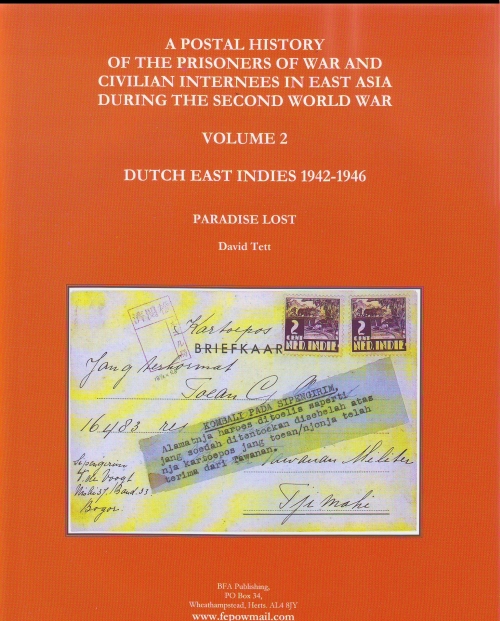 A Postal History of the Prisoners of War and Civilian Internees in East Asia During World War II. Volume 2 The Dutch East Indies 1942-1946 - Paradise Lost.

This book is Volume 2 of a series covering the postal history of the POWs and civilian internees in East Asia.

Volume 2 encompasses the story of the mails to and from Java, Sumatra and the other islands in the Dutch East Indies where more than a hundred and fifty thousand people were imprisoned. The majority were Dutch and Eurasians but the POWs include more than 8,000 British, principally RAF but RN and Army as well, 5,000 Australians and nearly 1,000 Americans. The hundreds of evacuees attempting to escape from Singapore were also imprisoned in the Dutch East Indies - remember 'Tenko'. Mail of all these groups are covered in the book.

As well as illustrating the mail from the camps, the historical background of the time is explained as is the distribution of the mail. Extensive examples of the messages sent are included.

How to Order Volume 2

If you would like to order a copy or copies of this book please send a cheque for £41 (£35 + £6 postage and packing) per book to:BFA Publishing LimitedPO Box 34,Wheathampstead,Herts AL4 8JYPlease state that you wish to order 'Paradise Lost'. Cheques payable to BFA Publishing.