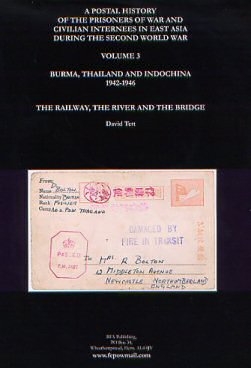 A Postal History of the Prisoners of War and Civilian Internees in East Asia During World War II. Volume 3 - Burma, Thailand and Indochina 1942-1946

The Railway, The River and The Bridge by David Tett

By early 1942, the Japanese had rapidly conquered vast tracks of South-East Asia. Hong Kong, Borneo, Malaya and Singapore, the Dutch East Indies, Burma and the Philippines had all fallen. Indochina and Thailand were neutralised, the latter declaring war on the Allies. India was the next big prize, but the Japanese needed a fast and safe route to supply the vast army in Burma being assembled for the onslaught. The sea route was long and insecure, with enemy submarines operating in the area. The answer, the Japanese High Command decreed, was to build a railway across the mountainous jungle to link Bangkok with Rangoon. And how was this to be achieved? By using the indentured slave labour of the local populations in South East Asia and the POWs taken in Malaya, Singapore, Timor, Java and Sumatra. The POWs were British, Dutch, Australian and American.

Apart from the workers transported to the area, a few POWs and civilians were taken in Burma, Thailand and Indochina and imprisoned in the region. Their postal history is also included in this volume.

The ability to communicate with relatives is one of the precious lifelines for prisoners in any war. In East Asia, in the Second World War, it was especially critical. It literally provided for many the will to live and a tenuous hold on life in those desperate years. The book contains hundreds of cards and covers, illustrating the communications that were allowed; precious scraps of news between the prisoners and their families so many miles away. For three and a half years this was the only means of contact permitted.

This series provides for the first time a history of communications between the prisoners and their families.

This book, and its predecessors, are more than just postal histories. They provide an insight into the meaning and importance of these communications both to those at home and those imprisoned.

David Tett began the series when Volume I - The Changi Connection - was published in February 2002, to mark the 60th anniversary of the Fall of Singapore. Volume 2 - Paradise Lost, covering the Dutch East Indies - followed in 2003.

Volume 1 has received international acclaim, winning Gold Medals in Atlantic City and Chester in 2002 and a special prize in Melbourne, 2002.

Volume 4 will deal with Hong Kong and further volumes will cover the Philippines, China, Taiwan, Japan, Korea and Manchuria.

How to Order Volume 3