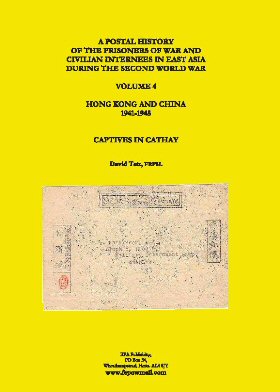 A postal history of the prisoners of war and civilian internees in east asia during the second world war.

This book, to be published in November 2007, is Volume 4 of a series covering the postal history of the POWs and civilian internees in East Asia.

By early 1942, the Japanese had rapidly conquered vast tracts of South-East Asia. Wake Island, Guam, Hong Kong, Borneo, Malaya and Singapore, the Dutch east Indies, Burma and the Philippineshad all fallen. Large areas of China were under the control of the Japanese, where fighting had started in 1931. Indochina and thailand were neutralised.

in Hong Kong the defensive battle was short lived, with the order to cease fighting announced on Christmas Day 1941, just seventeen days after the start of hostilities. POWs were rounded up and marched through the streets to makeshift camps. Civilians were treated similarly and, after a few weeks in dingy boarding houses, were transferred to Stanley Peninsula.

The conquest over, the few allied fighting forces in China was even swifter, with all potential opposition having been quelled within hours of Pearl Harbour. unusually the Japanese did not immediately intern enemy civilians. Instead they were allowed to live within their communities for more than a year. It was only in the first quarter of 1943 that they were ordered into the Civilian Assembly Centres.

The ability to communicate with relatives is one of the precious lifelines for prisoners in any war. In East Asia in the Second World War it was especially critical. It literally provided for many the will to live and a tenuous hold on life in those desperate years.

This book contains hundreds of cards and covers, illustrating the communications that were allowed, precious scraps of news between the prisoners and their families so many miles away. For three and a half years this was the only means of contact permitted.

This series provides for the first time a history of communications between the prisoners and their families.

This book and its predecessors are more than just postal histories. they provide an insight into the meaning and importance of these communications both to those at home and those imprisoned.

How to order the book

Please order early. No cheque will be presented until 15th November 2007