Re-print of Britons Never Never (Once I built a railroad) 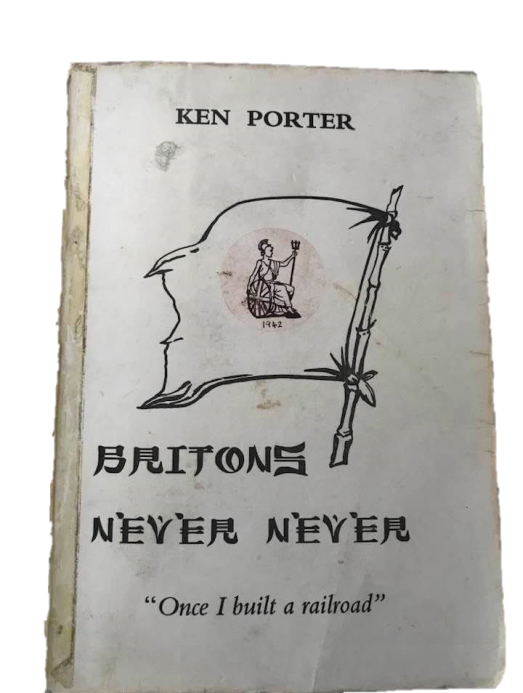 Not for profit and donation to TBRC

Ken was with the 5th Beds and Herts and wrote his compelling story of his entire war experience that involved enlistment and training, travel out the Far East and the battle for Singapore at MacRitchie Reservoir (Hill 105). He describes being at River Valley Camp before traveling to Thailand with Letter Party ‘Q’ and marching up to Tha Sao via Tha Dan, then working in Group 4, ‘L’ battalion towards Wang Yai.

By his careful health and self-management,Ken managed to avoided the nasty outbreaks of dysentery and Cholera, however,suffered ulcers at many times, which he prevented from becoming serious and life and limb threatening. At Tha Sao he wrote about the misfortune of Wally Nind who was attacked and badly injured by a bull elephant, of which he survived having surgery performed by Sir Edward Weary Dunlop.

Ken was eventually evacuated to Tha Muang,only to be drafted back to Tha Makham to carry out repairs to the bomb damaged bypass wooden bridge. Here Ken witness some of the famous bombing raids,following which he was transferred to Nakon Nayok and then on the Phitsanulok march with CSM Bennett.

The original book had many contributors, one being the late Bob Hucklesby who wrote to me when I was first researching the book, Bob wrote:

“I met Ken Porter as the result of a note I had put in the New Zealand Fepow Newsletter asking if anyone knew a Ted Edwards who had been a Fepow (he looked after me during my bad times) as I had lost contact with him. (I corresponded with Ted on regular bases and then nothing). Ken replied to say he had been in the Beds & Herts with Ted and he was a close friend but had died as the result of a brain tumour. Ken told me he had immigrated to New Zealand as a result of that friendship from living in Alderholt in Hampshire. It is a village about 20 miles away and he had a sister in New Milton, which is also near me. We corresponded regularly and we met whenhe visited his sister. Naturally I have a signed copy of his book. I had a letter in December from his family saying he had died on 5th September”.

The book has been fully transcribed, with the addition of footnotes and Index, and formatted for print over the past 18 Months. It is now for sale by private distribution in the UK and a donationfrom each book sale will be donated to TBRC as a financial assistance during the covid pandemic period, as it will still be some time before we can all travel freely once more.

Due to the worsening Covid19 situation in Myanmar with over half of the population feared to have been infected, thousands of deaths per day, and failing of the health care system- many of its people are fleeing to the neighbouring countries. This means that from 2nd August, from all the borders to Kanchanaburi will have strict lockdown precautions, allowing essential travelonly.

The details of the book price and donation are as follows:

Each donation amount is by choice above the minimum book price. The minimum price is £10, which will include a £1 donation and we suggest the maximum price is £15 with a £6 donation, therefore, you can choose the amount you donate within this scale.

To purchase one of these fabulous books,please email Martyn for payment and postage details at Justmartyn@westnet.com.au

Transcript with added foot notes and index, published with permission from the family of Ken Porter by Martyn Fryer, 5th Beds and Herts in the Far East. Part proceeds donation to TBRC.

It is not often these days that we get the opportunity to read a firsthand account of  a Far East Prisoner of War and I feel very privileged to have been involved in producing the second edition of Ken Porters book ‘Britons Never Never (Once I build a railroad)’, first published in 1993.