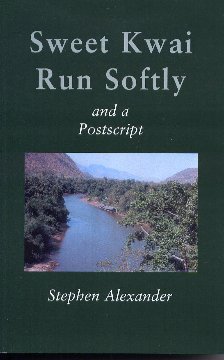 Stephen Alexander was 22, a subaltern in the Hertfordshire Yeomanry, when Singapore capitulated to the Japanese in February 1942. He worked on the 'bridge over the River Kwai' and in the jungle near the Burmese border. 1943 was the worst year, with the Japanese frantic to join the lines from Bangkok and Moulmein. Survival tactics learned from old Malayan hands, Australian and Dutch colonial troops were no match for disease, starvation and exhaustion. The author's will to live depended on old allegiances and new friends. Yet, although the deadly nature of this alien corner of the world was unforgettable,so was its beauty.

Repatriation after the fall of the atom bomb presented new challenges as the author and his friends - strangers in their own country - returned to their families and the search for jobs.

Fifty years later Stephen Alexander returned to the Kwai with his wife. The sight of the river and of the graves beside it ( his batman's among them ) proved a revalatory experience.

"I loved this book. It has pace and colour in the rolling narrative." JULIE SUMMERS, granddaughter of Colonel Toosey and author of ' The Colonel of Tamarkam : Philip Toosey and the Bridge on the River Kwai '

" A rich assortment of characters." SYLVIA JANE FLOWERS, The Spectator

"Not quite as coy as some of the other authors." Chowkidar

"A rare privilege to read." Gunner

If payment is in currency other than sterling please add the equivalent of £6.00 to cover bank charges.

It is regretted that payment by credit card cannot be accepted.