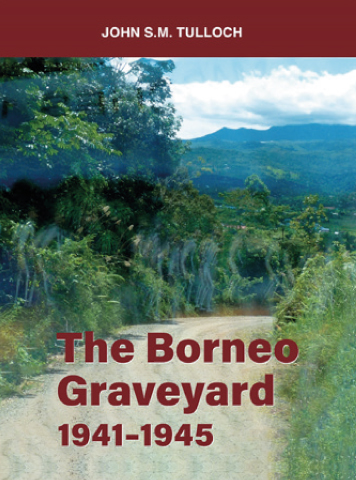 John Tulloch MBE was commissioned as an officer into the Royal New Zealand Artillery in 1966, and whilst serving in Vietnam, developed jungle warfare expertise. He transferred to the British Army in 1973, completed two Northern Ireland tours, a secondment to the Sultan of Oman’s Artillery and later commanded 137 (Java) Battery, R.A., which included a tour in the Falkland Islands in 1982. For the next 21 years, he was a visiting instructor on the British Army’s Jungle Warfare Instructors’ Course in Brunei.John spent 12 years researching and five years writing ‘The Borneo Graveyard 1941-1945’. The work describes the story of Allied POWs - Australian, British, Dutch and Indian, plus civilian internees who were sent to various camps in British and Dutch Borneo and Java. Many died of maltreatment, malnutrition or execution. Thousands of locals in Borneo perished in the same manner, including massacres. He continues the story of those who survived, their liberation, POW convalescence in Labuan and eventual repatriation. Also discussed in detail are the achievements of the secretive Z-Force, which gathered intelligence and trained local guerrilla ﬁghters, who, alongside local tribes, exacted a heavy toll on the Japanese in retribution during 1945. Although this 472-page hardback book is officially published, the only outlet in the UK is through the author. Copies have been sent, however, to libraries in Edinburgh and the British Library. To acquire a copy, which costs £25 plus £4.77 postage and packing, please contact John by email at: johnsmtulloch@gmail.com The ISBN number of the book is 978-983-3987-65-8.

The Sabah book launch will hopefully go ahead in August 2021, in conjunction with Ex SABAH UBIQUE, the Royal Artillery Act of Remembrance, which will take place in Sabah.

It is hoped to conduct Ex SABAH UBIQUE in Aug 2021/22, depending on the pandemic situation. Ex SABAH UBIQUE will honour all those R.A. personnel and their attached arms and services who died during the Far-East war and commemorate the ending of WW2. The whole event will cover 14 days.

It is intended the Royal Artillery contingent will attend the Sandakan Day Service (15th August 2021/2022), then walk the 164 mile Death March route and hold a simple service at the Kundasang War Memorial (KWM). The KWM is one of the first memorials in Sabah created to honour the victims of the Sandakan and Ranau POW Camps, the Death Marches and the locals who risked or lost their lives helping the POWs. In total, 2,428 Australian and British POWs perished in the Sandakan and Ranau POW Camps, which included over 1000 POWs who died on the Death Marches. There were no British survivors. Only 6 Australian POWs survived who had escaped. The overall death rate was 99.75%. Further details can also be obtained from John at: johnsmtulloch@gmail.com