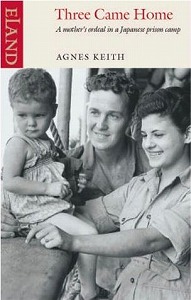 A mother's ordeal in a Japanese prison camp

Based on the autobiographical book by Agnes Newton Keith, Three Came Home stars Claudette Colbert as Mrs. Keith. Trapped in Borneo during the Japanese invasion, Mrs. Keith and her children are penned up in a prison camp along with several other American and British subjects. Despite the humanitarian views of camp commander Sessue Hayakawa, Mrs. Keith is subject to torture, starvation and humiliation at the hands of the guards, with Hayakawa helpless to intervene lest he incur the wrath of his own superiors. Three Came Home contains several unforgettable moments, including a comic interlude between the male and female prisoners that ends abruptly with a barrage of Japanese bullets, and the heartwrenching scene wherein Hayakawa learns that his family has been killed in a bombing raid. Since lapsing into the public domain in 1977, Three Came Home has popped up innumerable times on cable television. ~ Hal Erickson, All Movie Guide