To Freedom Through China 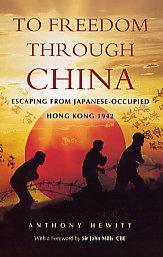 On Christmas Day 1941 Japanese forces marched into the city of Hong Kong after a fierce battle. Large areas of Southern China, including the city of Canton, were already over-run by the Japanese, who had been waging war in the country since 1937.

Captain Tony Hewitt was among the many thousands of British servicemen and civilians taken prisoner. Soon after his incarceration in Shamshuipo prisoner of war camp, he managed to escape with an army medical officer and a New Zealand pilot. Capture would have meant certain death. Together the three escapers crossed the New Territories and passed into Japanese occupied China, where they were attacked by bandits. Narrowly avoiding recapture by the Japanese, they met up with a band of Communist guerrillas who took them to their camp in the mountains. There the three fugitives dispensed rudimentary medical aid and military training and, in return, were overwhelmed with extraordinary hospitality. Eventually the Communists agreed to escort them by night on punishing cross-country marches to the safety of Chinese Nationalist lines.

From there the trio made their way by slow riverboat and a charcoal-burning truck, that careered madly across precipitous mountain passes, to the British Military Mission in Kukong.The appalling poverty and devastation caused by Japanese bombing, which they encountered on the way, were offset by a beguiling peace of mind that overcame them in the uninhibited life that swallowed them up and set them free. But the fun had to come to an end. Indeed the manner of that ending is almost as bizarre as their amazing adventures in reaching their destination.

To Freedom Through China, first published under the title Bridge with Three Men, is a remarkable story of courage and endurance told in a hugely readable and attractive style.

(Please write your name and address on the reverse of cheque)