'Towards the Setting Sun' 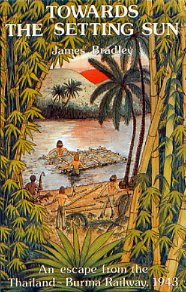 An escape from the Thailand - Burma Railway 1943

Jim Bradley's story of escape from the Death Railway is unique. Five of the ten who broke out died in the attempt to escape. Survivors of other escapes were all executed by the Japanese. For Bradley the war ended after a year's interrogation, suspense awaiting execution and trial by military court.

He tells unemotionally, dispassionately and totally without exaggeration a story which has too often been sensationalised in journalistic attempts to attract attention. The full horror of Japanese and Korean brutality is not evaded - indeed these men escaped in order to tell the world the real truth of what was happening on the Death Railway - but Jim's story is historically accurate, told without rancour and with deep understanding. It is his very personal story, written at his wife's insistence.

'Towards the Setting Sun' has a special appeal to the survivors and descendants of the 61,106 prisoners of war who worked on the Death Railway and to those who in similar circumstances suffered in P.O.W. camps elsewhere in the Far East.

James Bradley's book was first published in 1982 with a second publication, printed in Australia, in 1984. Sadly Jim died two years ago and his widow Lindy recently offered COFEPOW the chance to buy the remaining few copies of the 1984 edition, brand new at a reduced price. Her intention is that we now sell these remaining books and the profit made will boost the funds being raised to build the FEPOW Memorial Building.

Unfortunately all copies have been sold and so is no longer available from COFEPOW.