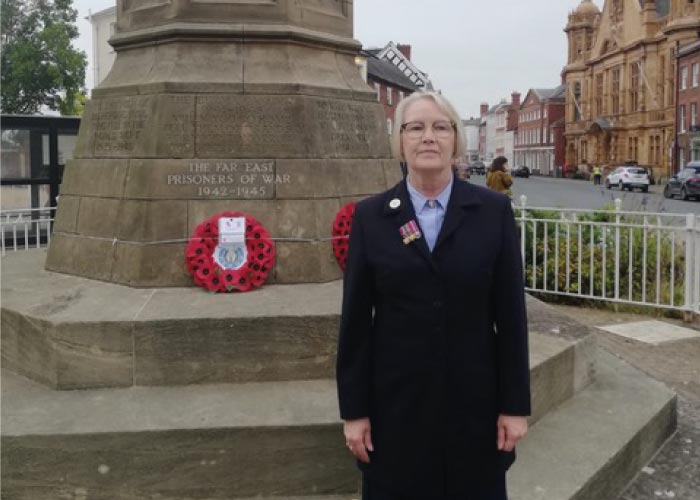 During November 2019. I contacted Mr. Steve Kerry the Hereford city council clerk and put a proposal and request to him about Hereford having a tribute FEPOW memorial. It turned out Steve Kerry’s father was part of the 14th Army so he was very supportive of the idea. We entered into discussions and I was contacted by an ex General Arthur Denaro out of the blue, who was very encouraged that I had proposed the special contribution in memory to all the brave Fepow’s as his father was also a FEPOW.

I attended a meeting with Arthur Denaro and it was agreed that with my consent he would take the lead as he was a member of the VE/VJ DAY committee and that I would raise the money. As time went by it turned out that the Council paid the contribution to the Fepow engraving to the Hereford war memorial.

During the meeting we focused on having the Fepow memorial situated in the Hereford Cathedral grounds, I was informed by Arthur Denarothat the Dean of Hereford had suggested having the main war memorial engraved so that it would be ready for VJ DAY.

It was finally decided that the Hereford war memorial would be engraved.

At 11.00 hrs the Hereford Town clock chimed followed by Kelvyn Jenkins playing on the bugle ‘Reveile’ Last post followed by thetwo-minute silence. The Dean lead the blessing of the Far east prisoner war memorial and recited the FEPOW Prayer and addressed the importance in remembering all the far eastern prisoners of war so that their suffering and sacrifice was not in vain. The Lord Lieutenant laid the Fepow wreath followed by me laying the Cofepow wreath. Then the congregation recited the Lord’s prayer and the Salute ended the service.

It was an honour and privilege to be part of the 75th VJ Day anniversary and ensuring that the Far eastern prisoners of war including my grandfather are being honoured and remembered on the Far east prisoner of war memorial in Hereford.