Commemoration at the National Memorial Arboretum

On 3 October, over 650 people attended a service at the National Memorial Arboretum, in Staffordshire, to remember the 828 prisoners of war (POWs) who perished during the Lisbon Maru incident of 2 October 1942.  During the service, a new memorial was unveiled by Vice Admiral John McAnally CB LVO, Vice Patron of The Royal Naval Association, when he said:  “These men did not die in vain.  Not only did the great gallantry of many individuals save the lives of their comrades but also they like all who fought in the Far East in World War 2 contributed to development of the Japan we see today:  a bastion of democracy in Asia and a country who has resumed her historic relationship of friendship with the United Kingdom.”

The Lisbon Maru was a Japanese freighter requisitioned as a troop transporter.  Armed fore and aft, it set sail from Hong Kong in late September 1942 carrying nearly 800 troops.  It also carried 1,816 British POWs to be taken to Japan as slave labour, but had no markings to show their presence, and was therefore a legitimate target for allied attack.  On the morning of 1 October, it was torpedoed by USS Grouper, an American submarine, and holed below the waterline.  The Americans were unaware that there were POWs on board.  After the torpedo attack the hatches were battened down on the three cargo holds where the POWs were crowded in cramped and squalid conditions, and for the next 24 hours they suffered in hot, airless conditions with no food, water, fresh air or latrines, and dysentery was rife.

When the POWs realised that their Japanese guards intended for them to go down with the ship and drown, they began to plan their escape.  The prisoners managed to break out of the holds just before it sank, but the Japanese troops began firing at them with rifles and machine guns, killing and wounding dozens.  As the POWs jumped into the sea to escape the sinking ship the slaughter continued.  The intervention of local Chinese fishermen, who began to rescue men from the water, caused the Japanese to stop the killing.  828 of the prisoners died from gunshot wounds or drowning.

“This terrible event has remained hidden and forgotten for far too long,” said Major (Ret’d) Brian Finch, one of the organisers of the memorial.  “The number of descendants who attended the service is a testament to the sense of importance attached to this memorial and the need to ensure that those who suffered and died during the Lisbon Maru incident are remembered.”

The service was attended by descendants of those aboard the Lisbon Maru and representatives of the Armed Forces and veterans. It was conducted by The Reverend Canon Roger Hall with assistance from The Reverend David Conroy and The Reverend Iain May.

For interviews with descendants of victims or survivors of the Lisbon Maru incident, please contact Major (Ret’d) Brian Finch

A full-length video of the service can be seen at https://bit.ly/3htkbVG (from 6 October) 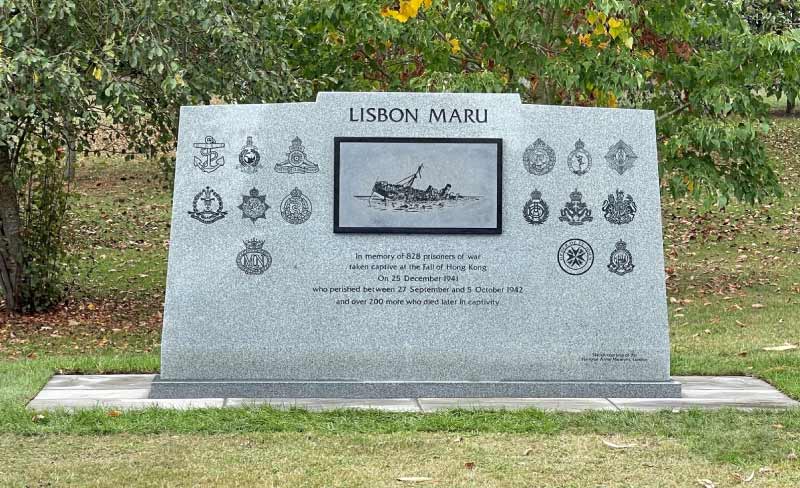