Walter Tuttlebee has written a final report from the Repatriation Remembrance in Southampton.

On Tuesday I heard from Jo Palmer of Radio Solent, whom some of you will know from previous years. Jo has attended the memorial event since about 2015 and had interviewed Bob for Radio Solent. She wanted Bob to know they would re-broadcast that interview on yesterday’s early morning programme. In about 2.5minutes Bob talks about his time in the death hut in Thailand on the railway, recovering on the hospital ship coming home, and his feelings on seeing the Isle of Wight and getting back home to his family.

Yesterday morning on arrival at Town Quay Park near Southampton seafront, it was cool and overcast but fortunately not raining. After a short while Craig, the events manager from Southampton City Council, arrived with a colleague who had been involved in the discussions with Meg Parkes about putting the memorial in Town Quay Park. Meg leads the Researching FEPOW History Group, RFHG. They had established a similar memorial in Liverpool in 2011 and, encouraged by Bob, went on to commission the Southampton Memorial. Some of you may know Meg and/or may have met her in October 2013, at St Michaels church in Bugle Street, at the memorial Service of Dedication.

After being joined by the Mayor, Craig proceeded to call Bob Hucklesby and facilitate a video conversation between him and the Mayor. This then flowed naturally into a brief ceremony which Craig and the Mayor had crafted. This included an introduction from the Mayor about the wartime role of Southampton in repatriation and the impact of their experiences on the servicemen and their families.  She proceeded to read the FEPOW prayer and the Kohima Epitaph and then to lay two wreaths. The first was on behalf of NFFWRA (requested by Bob, as its president, who was unable to travel) and the second, on behalf of the city, in memory of those FEPOW and civilian internees who returned and also of all those in the Far East who did not return.

If you move the mouse over the video you should see some icons appear - including one like a loudspeaker with an X beside it - click on this and this will un-mute the audio.

There is a lot of traffic noise and unfortunately the video/audio may appear out of sync in places - I think this was due to the uplink bandwidth.

I expect some others visited the memorial later in the day to pay individual respects. I understand that this morning two wreaths will have been laid by children from the local school, St Johns, who normally also join us each year. Given all the pressures that teachers are under at this time I was particularly pleased to hear that they had made this a priority. I’d also like to thank our friends from the Town Quay Park Association who maintain the area around the memorial for their ongoing support and help.

I also want to thank all of you who have borne with me as I’ve tried to work out what might be possible this year, given the restrictions of Covid and the frequently changing guidance.

I’ve attached below some photographs forwarded to me by Craig from the council and a few of my own.

“We will remember them” 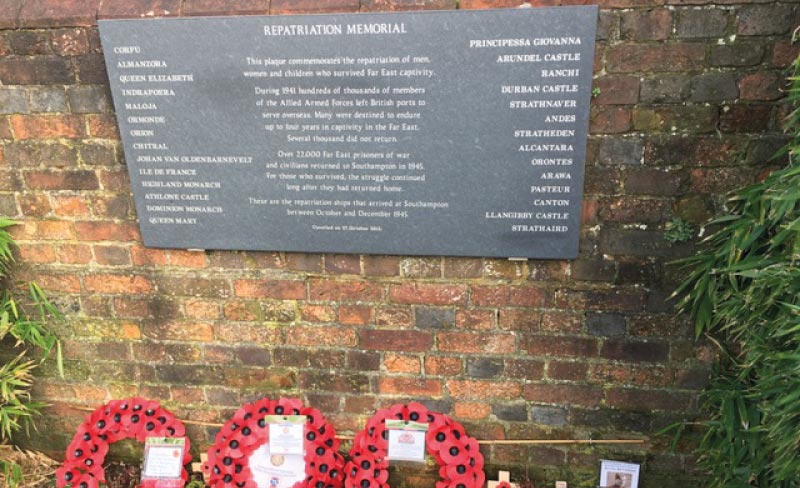