Ron, who was well known to many of the FEPOW and Civilian Internee community, was born in Tianjin’s British Concession, China in 1934. He passed away peace fully at home in Sussex.U.K. on 27th September 2020 aged 86.

When on 8th December 1941 the Japanese Army took control of the Tianjin’s British Concession, 8-year-old Ron,his parents and baby brother spent almost a year under ‘house arrest’, curfews and moves to different hotels by the Japanese. In March 1943 the family,including his maternal grandparents were moved with hundreds of others to Weihsien in the Shandong province. Weihsin Civilian Assembly Centre was a former American Presbyterian mission where they had established a school, seminary and hospital. But by 1943 it was “a scene of destruction and despair. Japanese had taken over the residences at their headquarters the rest of the compound had suffered from looting and neglect and a motley collection of run down buildings where about 1500 of us were stuffed like sardines” (David Michell: A Boy’s War, Overseas Missionary Fellowship 1988.) p.62-3

In these ‘rundown buildings’ Ron, his baby brother and his parents struggled with the primitive conditions for the following two and a half years.

Liberation came on 17th August 1945, Ron writes, “… suddenly a large American aircraft appeared from the sky and out of the rear dropped seven parachutes. We ran down the sloping road and through the gate, the guards made no attempt to stop us. As we approached the paratroopers emerged from six foot high kaoliang with guns at waist height. When they realised that they were being approached by schoolboys, women crying and gangly thin men they relaxed….One of my friends grabbed a parachute and we passed the silk around. Anyone got a knife. A knife appeared and the panels of the parachute were soon mutilated and our heroes asked to sign before they disappeared into camp. The good natured soldiers obliged us…I got all seven signatures. Seventy years later I still have it and the names of the Duck team.”  (Ron Bridge;No Soap, Less School. Chillies Oast Publishing, 2019.) p.147-150.

On 17th October 1945, two months to the day after they were ‘liberated’ Ron and family left the camp and flew back to Tianjin.There was a brief repatriation to England in 1946 and then the family returned to China. Ron, aged 17 finally arrived to settle in England in July 1951 where he joined ICI. At the age of 18 he joined the RAF and, much later, worked for various civilian air lines including British Airways. During his career he was awarded the Air Force Cross, various Directorships and Fellowships,including the Freedom of the Honourable Company of Air Pilots and the Freedom of the City of London.

Ron’s recollections of life in China,internment and his later career are vividly recounted in his autobiography: (Ron Bridge; No Soap, Less School. Chillies Oast Publishing, 2019.)

ABCIFER was founded in 1994 with the aim of seeking compensation for the suffering of civilian internees in the Far East during W.W.II. Keith Martin was the first Chairman, Ron took over chairmanship in 1999. This period and his tenacious support and fight for compensation is modestly covered in just one paragraph at the end of his memoirs. But in truth it was a long and hard battle that went on for years with both Ron and Keith spending many hours in the Public Records Office going through files and finding the evidence to support the claim.

In 1995, with the help of British lawyer Martin Day, ABCIFER and the Centre for Internees Rights, Inc. (CFIR), the main American group for civilians, joined forces with groups from Australia and New Zealandto file a lawsuit against the Japanese government for compensation for the ill-treatment they had received in the camps. Their claim for $20,000 dollar search is based on compensation paid to American Japanese interned by the Americans during the Second World War.

In 1999 Royal British Legion took up the request for a special gratuity for POWs of the Japanese. Towardsthe end of 2000 Lewis Moonie, British Defence Minister, told MPs that thesurviving Britons who were held captive by the Japanese and the widows of thosewho had since died were to receive an ex gratia payment of £10,000 each.Moonie claimed that this was a “debt of honour” owed to civilian, forces andmerchant navy captives.

But just sixmonths later, after thousands of applications had been made and paid, theMinistry of Defence (MoD) who were now administrating the scheme, clarifiedthe criteria for payment.  It was nolonger sufficient to hold a British passport and to have been interned toqualify for compensation. Now it was essential for claimants to have a proven“blood-link

Although he was not personally affected by this Ron was “appalled that those internees who were British Passport holders but due to being Jewish, coloured born in Ireland or women who had obtained British nationality by marriage prior to 1941, were excluded from the ex gratia payment of £10,000 implemented by Tony Blair.” (Ron Bridge.p. 215.)

Hence Ron continued his campaign and with the help of ABCIFER’s solicitors he was able to “get four QCs to act pro bono and with additional support from 300 Members of parliament, to defeat the MOD in the High Court” (Ron Bridgep.215) Itwas a long fight. It was not until 2006 that compensation was paid.

We are sure that those who received the original ex gratia payment and those who fell into the excluded category and their families feel a huge debt of gratitude for Ron’s tenacity, drive and his endless campaigning for which he was quite rightly appointed an MBE in 2007.

But that was not the end. Ron’s energy, enthusiasm and commitment to maintaining and helping preserve the history of POW and Civilian Internment in the Far East during World War II continued. He created a most comprehensive data base of civilian internees and POWs and was most definitely the ‘go to person’ for those seeking detailed information about internees.

Ron’s passing is a huge loss to all those who knew him. But, a copy of his database is now available for all to view at St Michael, Cornhill. (St Michael's Alley, Cornhill, London EC3V 9DS) 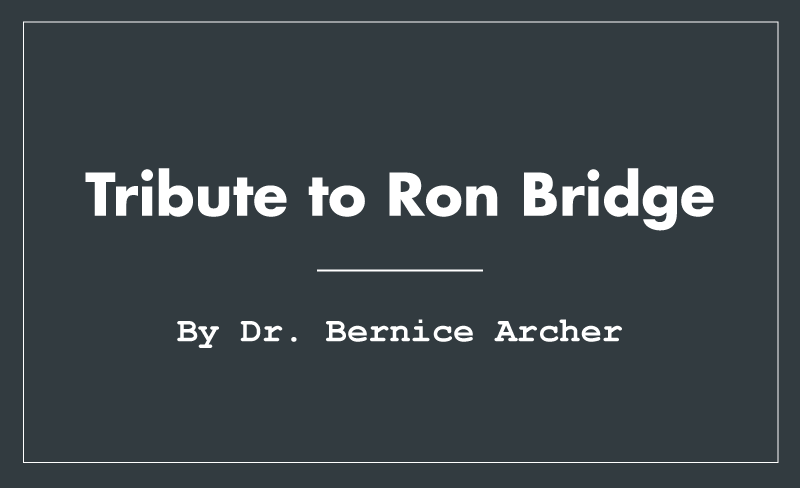