One of Shropshire's last survivors of the hell and hardship of the Japanese prisoner of war camps, Vic Pugh, has died at the age of 98.

Vic and his wife of 73 years, Elsie, 96, died within two weeks of each other.

Captured serving in the RAF in Java, he was a prisoner for three years and returned home haunted by his experiences.

He found that the intense concentration required in making highly detailed working models – he had caught the model-making bug as a youngster growing up in Birmingham before the war – helped him shut out that nightmare.

His models won six gold awards from the Society of Model Engineers in London.

In 2018 his precision engineered models, including steam locos and fire engines, were showcased as a collection for the first time in a display at Shrewsbury Museum & Art Gallery in an exhibition titled Miniature Marvels – Celebrating One Man’s Passion for Model Engineering.

Another lifelong passion for Vic, from Hanwood, was amateur radio.

Born in Kington, Herefordshire, and brought up in Great Barr, Birmingham, with the outbreak of war he had wanted to go into the RAF as a radio operator, but was turned down because – of all things – colour blindness.

So he went on to aircraft instruments instead and in 1941 was sent to Singapore. Within months Britain was at war with Japan, and as Japanese forces closed in, they were evacuated on the ship Empire Star, which made it to Java despite being hit several times by Japanese bombs.

Vic was to recall: “We had an army officer come to us. He divided us up into four and we were given rifles and a Tommy gun between the four of us. They turned round and said ‘just do what you can’ and left us to it. We couldn’t do much. I had the Tommy gun – it was the first time I had ever had one.”

With the fall of Java and Sumatra, they were taken prisoner and used as forced labour.

The prisoners were brutally treated, poorly fed, and riddled with disease. Vic narrowly escaped certain death when he secretly acquired some bits and pieces of radio equipment, although not enough to make a radio.

“One day I was recovering from malaria and put it to sort it out when a Japanese guard walked in. I thought ‘Christ, that’s it.’ I lay on it and started moaning, and he didn’t notice it.”

Had it been discovered he would have, in his words, got “the chop” – that is, been beheaded. “That is if you were lucky. If you were unlucky they bayoneted you.”

In the final part of the war they were taken back to Singapore to dig tunnels in the hills. At one point he was in the notorious Changi jail, but says: “We thought it was relatively cushy in there.”

The Japanese guards made it clear to the prisoners that if the Allies landed on Singapore they would be “disposed of.”

“We were digging these tunnels about mid morning one day when they lined us up and stuffed us on the back of lorries. We thought: ‘Bloody hell, that’s it. We’re going to be done in.’

“They took us to the camp and shut the gates behind us. We got in there and our officer said the war had ended. And that was it. The reaction was quite muted. It didn’t register.”

By this time Vic weighed less than six stone. He returned to Britain through RAF Cosford, a reception centre for returning RAF prisoners of war.

He married Elsie, from Walsall Wood, on March 22, 1947, and they went on to have daughter Janet. The couple came to Shropshire in 1982.

He was a member of the Java Far Eastern POW Club 1942 and he and Elsie took part in its annual reunions.

Vic, who worked for the Midlands Electricity Board, recalled that on his return he had enduring nightmares. During one nightmare he grabbed Elsie round the neck and called her a “yellow *******”.

A joint service for Vic and Elsie is taking place for close family only on June 11 at Emstrey crematorium. 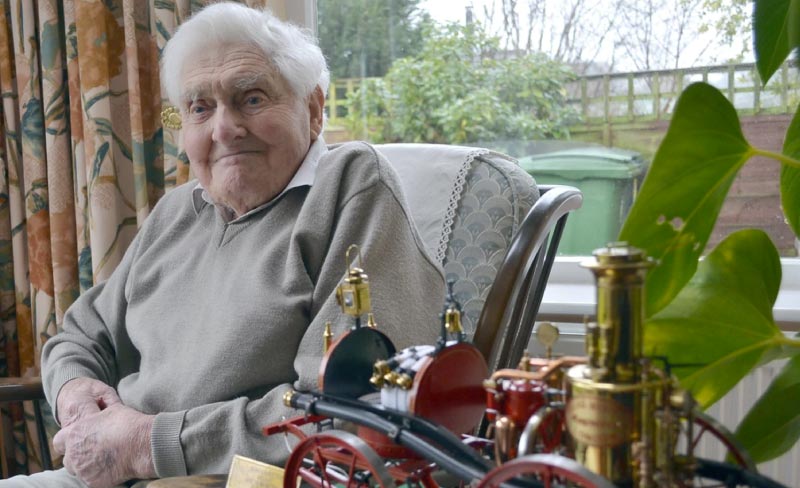